Case: Steel case. Water Resistant to 50 meters (150 feet). The Speakeasy case is evocative of the Roaring 20’s in the USA. Art Deco was the design of the era, and is reflected in architecture (Empire State Building, Chrysler Building), art (Picasso), and fashion.  Case is numbered “No. 34” on side of case – there are only 150 of the Speakeasy cases proceed – each watch will be unique.

Shown with a black leather strap with white stitching.

This watch is One-of-a-Kind. 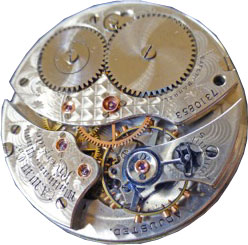